Over the past couple years I've occasionally played with some of the tools for learning the Dvorak keyboard layout. About two weeks ago I decided to make the switch and see if I could improve my typing skills further.

The Dvorak keyboard layout was invented as an alternative to the standard Qwerty layout that most are accustomed to. It rearranges the keys in a manner that reduces overall hand movement and thus leads to more comfortable typing. Those that switch to Dvorak often note that they're able to type faster and more accurately.

I decided the best way for me to learn was to go cold turkey and make it my default layout on both my home and work computers. Over the first few days I focused on using Dvorak Keyboard Training and Typing Club to familarize myself with the locations of all the keys. Along with that I started practicing typing tests on Monkeytype and 10 Fast Fingers.

From a programming perspective, the most jarring thing about the layout to me is the repositioning of punctuation characters. These felt very awkward to type at first but slowly I'm getting better accustomed to their new locations.

Aside from that you basically have the vowels on your left hand and the consonants on your right. Dvorak tends to favor the right hand whereas Qwerty favors the left hand. I'm left-handed so this requires building a little more strength in my right hand.

Every now and then I'd switch back to Qwerty and run through a typing test just to see how I stacked. I can still type in that layout but I'm seeing that the more time I spend with Dvorak the more my Qwerty accuracy is going down.

Probably my biggest discomfort was reaching to hit the L key with my right pinky finger. This issue made me realize that I had developed a bad habit of not using my pinky fingers on the top row when typing in Qwerty. Another defect I noticed being corrected through training was that I was hitting the B key (X in Dvorak) with my right hand which is actually the responsibility of the left hand.

I've been using Monkeytype to benchmark my general speed and accuracy. I took a couple quick baseline tests in Qwerty right at the beginning just so I have a target of where I need to work back to. 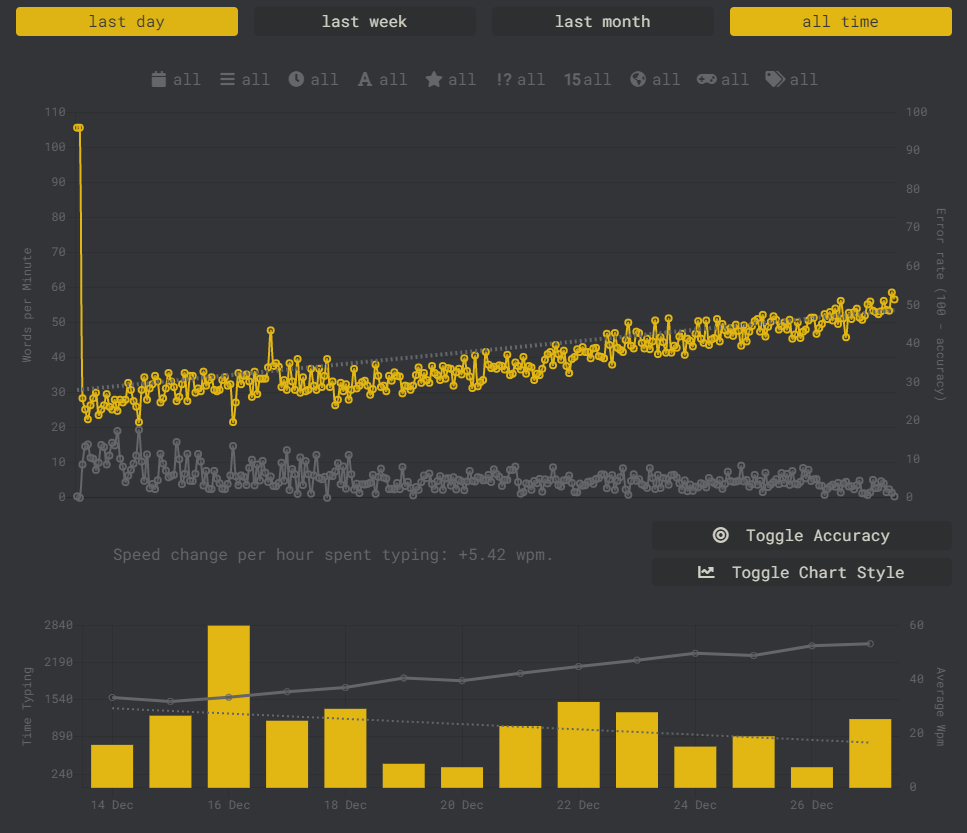 As you can see I'm almost halfway back to my Qwerty speed on the test but my typing speed for everyday tasks is slower than this. Realistically I'm expecting it to be at least a few months before I'm back at full speed.